The main themes of the program are as follows:

From the algebro-geometry side, the Hodge theory and the Minimal Model Program offer powerful tools. Since the work of Deligne-Nakamura-Ueno [Ue75] in 1975, we know that the automorphisms of the variety preserve the Iitaka-Kodaira fibration. The result constitutes a first step in the classification problem and suggests the use of natural fibrations to study the dynamics of (semi-) groups. This fundamental result has been extended to non-invertible systems by Nakayama-Zhang [NZ09] in 2009. Other fibrations induced by Albanese maps and Maximal Rationally Connectedness fibrations are also invariant. They allow ones to focus the classification problem on the three classes of varieties: Rationally connected varieties Campana [Cam92], Kollar-Miyaoka-Mori [KMM92], Varieties of general type, and Varieties with vanishing Kodaira dimension and irregularity.

A fundamental work by Gromov [Gr77] in 1977 relates some dynamical invariants of a holomorphic self-map, such as dynamical degrees and topological entropy with other algebraic invariants defined by the action of the map on the Hodge cohomology group. This important discovery has been established in its full generality for meromorphic self-maps in the work of Dinh-Sibony [DS05] in 2005 and for maps with invariant fibrations in the work by Dinh-Nguyen-Truong [DNT12] in 2012.

As mentioned above, the minimal model program, initiated by Mori, offers another powerful tool to the classification problem. The idea is to run an equivariant minimal model program in order to reduce the system to the case where the phase space is a uniruled variety (with a Fano fibration) or a minimal variety, i.e., with a semi-positive canonical bundle. Recent spectacular developments of the minimal model program, including fundamental works by Birkar-Cascini-Hacon-McKernan [BCHM06] in 2006 and Siu [Siu08] in 2008, will allow to have significant progress in the equivariant program (e.g. Meng-Zhang [MS17]).

From the dynamical side, positive closed currents were introduced by Sibony in complex dynamics in 1990 and their study has become an extremely powerful tool in the field. They have been introduced and used earlier in complex geometry as generalized complex varieties by Lelong, Oka, Siu, Demailly, Berndtsson among others. In the dynamical setting, they allow one to compute in the Hodge cohomology group, and get strong ergodic and explicit equi-distribution properties despite that the system may not be uniformly hyperbolic. The theory of positive closed currents is still a fast growing research direction and one expects many interactions with dynamics and algebraic geometry in the coming years. Only few mathematicians can master the techniques from dynamics, pluripotential theory and algebraic geometry. One of the aims of this program is to offer them an opportunity to learn the techniques they have not known yet and to work together on some concrete questions.

It is worthy mentioning that algebraic dynamical systems may allow to solve problems from algebraic geometry which do not originally involve dynamics. For instance, a recent remarkable result by Lesieutre [Le18] in 2018 (see also Dinh-Oguiso [DO19]) uses automorphism actions in order to get complex algebraic varieties with infinitely many real forms and also a result by Cantat-Oguiso [CO15] using complex dynamics to obtain information on the movable cone conjecture for Calabi-Yau manifolds of special type. One can also expect that dynamics could be useful in the study of K3 surfaces, Calabi-Yau manifolds and their moduli.

There are at least four research topics which involve arithmetic and the theory of dynamical systems that we would like to consider in this program. Consider a dynamical system on an algebraic variety which is defined over a number field. The orbits of points or subvarieties can be studied using techniques from both the number theory and dynamics. The main tools are invariant height functions. They are the number theoretic counterparts of dynamical Green functions which are potentials of invariant currents. They allow to construct invariant measures and study equidistribution problems, as pluripotential theory does for systems defined over complex numbers field. This research direction is developed by Szpiro, Ullmo, Zhang and also Silverman, Kawaguchi, and Chambert-Loir among others; see Szpiro-Ullmo-Zhang [SUZ97], Zhang [Zsw06]. Strong similarities between results and techniques of the arithmetic nature and those of the analytic nature suggest deep interactions between arithmetic and holomorphic dynamics. We will continue to focus the program on this topic.

Another direction is the p-adic dynamics which is developed by Baker, DeMarco, Rivera-Letelier, Favre, and Jonsson among others. Although analytic tools have been introduced in this topic, and Yoccoz expected strong interactions between p-adic and complex dynamics, more efforts will be needed to develop the theory in higher dimensions.

In positive characteristic, the dynamics cannot be studied directly on the phase space which may be finite but the action on cohomology poses many challenging questions. The absence of a good notion of the positivity, which exists in the complex setting, is a great source of difficulties. Some important works have been recently done by Esnault-Srinivas [ES], Esnault-Oguiso [EO], and Tuyen [Tu16]. We aim to better understand the situation and focus discussions on possible new tools and techniques. This may lead to interesting applications in Hodge p-adic theory.

Finally, we are also considering the so-called algebraic flow which is the trace of a complex algebraic set in a symmetric domain and the distribution of its image in a compact/arithmetic quotient. The topic is well illustrated by the famous Ax-Lindemann-Weierstrass theorem Ax [Ax72], Baker’s works on algebraic dependence of complex numbers and recent Ullmo-Yafaev’s works Ullmo-Yafaev [UY17], Ullmo-Yafaev [UY18]. Notice that recently, the o-minimal theory has been introduced in the field with several applications by Pila-Zannier [PZ] and other people. On the other hand, techniques from complex analysis such as positive closed currents should be useful. However, the communication between people from this topic and complex geometry is still very limited. Our program will contribute towards developing such potential collaborations.

Due to the problem of different time zones, some talks are pre-recorded. Live talks including live Q&A will be conducted as well.

Part Two of the program will be held in Year 2023.

Online event
Registered participants will receive the links to participate in the virtual activities. 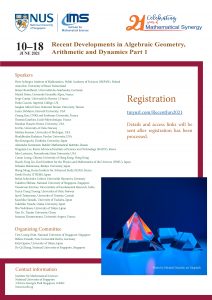