Abstract of the talk: Each year, at least 40,000 scientific papers use electronic structure calculations to better understand molecules and materials, and to predict new ones with useful properties. These calculations solve the equations of quantum mechanics for the electrons. Applications range from finding new catalysts and new superconductors to understanding planetary interiors and climate change. Such calculations are beginning to play a crucial role in climate-change models. I will attempt to explain both the science and the sociology of this subject. This is a talk aimed at a general audience with an interest in science and that cares about the future of our planet. It touches on chemistry, physics, mathematics, engineering, and computer science.

Kieron Burke is a professor in both the chemistry and physics departments at UC Irvine. His research focuses on developing a theory of quantum mechanics called density functional theory (DFT). He works on developing all aspects of DFT: formalism, extensions to new areas, new approximations, and simplifications. He has given talks in theoretical chemistry, condensed matter physics, applied mathematics, and even organic chemistry. He is a Chancellor’s Professor of UC Irvine. He is also a fellow of the American Physical Society, the British Royal Society for Chemistry, and the American Association for the Advancement of Science. Most recently, he was honoured to participate in the Baker symposium at Cornell in 2016, he was named the 2017 Bourke Lecturer by the British Royal Society of Chemistry, and elected a member of the International Academy of Quantum Molecular Scientists. 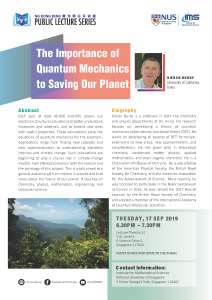