Deep learning is a very powerful methodology which can solve many AI problems. There are a number of problems with it, though, including a lack of transparency and a lack of generalizability from one data set to another. In addition, it often requires a great deal of data for training and can be very expensive computationally. In this talk, we will discuss some investigations into the behavior of deep learning, and suggest some approaches to deal with the problems mentioned above. 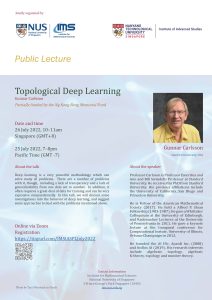 Watch the recorded video of the live lecture here.