Abstract of the talk: I shall first recall some of the history of the theories of the solar system. Next I shall introduce the HORIZONS project of the American National Aeronautics and Space Administration, which allows you to plot the motion of thousands of objects in space, and then discuss ways to apply mathematics in order to interpret what it gives you. Possible applications include understanding Kepler’s derivation of the orbit of Mars, the motion of the moon, slingshot orbits, and potential chaos.

Professor Bill Casselman is Professor Emeritus in mathematics at the University of British Columbia. He has taught courses in programming and computer graphics, and was graphics editor of the Notices of the American Mathematical Society for the years 2001–2016. He obtained his PhD from Princeton University in 1966, where his advisor was Goro Shimura. Professor Casselman’s mathematical research focuses on representation theory, automorphic forms, geometric combinatorics, and the structure of algebraic groups. He was named to the inaugural class of Fellows of the American Mathematical Society in 2013. 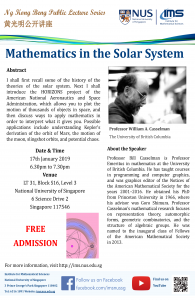