Jointly organized with the Department of Mathematics, NUS

The IMS Graduate Summer School in Logic is jointly organized and funded by the Institute for Mathematical Sciences (IMS) and the Department of Mathematics of the National University of Singapore. The Summer School bridges the gap between a general graduate education in mathematical logic and the specific preparation necessary to do research on problems of current interest in the subject. In general, students who attend the Summer School should have completed their first year, and in some cases, may already be working on a thesis. While a majority of the participants will be graduate students, some postdoctoral scholars and researchers may also be interested in attending.

Having completed at least one course in Mathematical Logic is required, and completion of an additional graduate course in model theory, recursion theory or set theory is strongly recommended. Students should be familiar with the Gödel Completeness and Incompleteness Theorems, basic results in model theory and recursion theory, as well as the Gödel and Cohen Independence Theorems in Set Theory.

Preference will be given to students who have not attended the summer schools previously held at IMS, but all interested graduate students are welcome to apply.

For full details of the program, please click here. 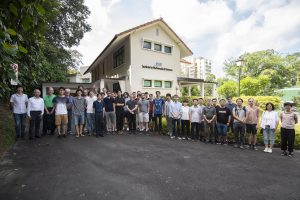