To determine whether a given sequence of real numbers is equidistributed and, if this is the case, to estimate the speed of convergence to equidistribution (discrepancy) are usually difficult questions. Lacunary sequences are those where the ratio of successive terms is bounded away from one. A particular family consists of the sequences where the ratio of successive terms is a constant integer greater than 1. These are of the form (b^k x)_k where x is a real and b is an integer greater than 1. These sequences are equidistibuted modulo 1 exactly when every block of digits in the base b expansion of x occurs with the same asymptotic frequency as every other block of equal length. Emile Borel called these real numbers x normal to base b. We know no example of a familiar mathematical constant which is normal to some integer base.

One challenge is to prove the existence of real numbers enjoying simultaneously prescribed digital and Diophantine approximation properties, a more daunting challenge is to give explicit examples of such numbers. In between, one can try to give computable constructions of them.

An analog of equidistribution occurs when using Monte-Carlo simulation with pseudo random numbers, many problems remain to be studied from the point of view of number theory and computer science.

Please note that our office will be closed on the following public holiday.
– 1 May 2019, Labour Day 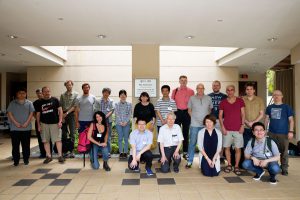 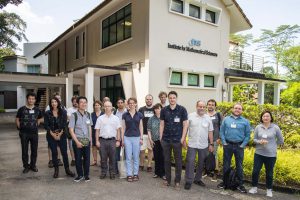