Interacting many-particle quantum systems are complex, indeed, in the most interesting case of Coulomb potentials, too complex for a direct analytical or numerical treatment. It is therefore of utmost importance to reduce the complexity and derive effective descriptions – mostly in terms of single-particle quantities. In particular, the success of density-functional methods in chemistry and solid-state physics has disseminated effective descriptions into the wider scientific community. The objective of this program on density functionals is to initiate collaborations between researchers of various backgrounds (theoretical physics, theoretical chemistry, mathematical physics, mathematics, computational materials science, biology) and bridge the gap between known results of mathematical rigor and modern applications of effective single-particle descriptions of interacting many-particle systems.
The workshop programme includes (i) nonrelativistic functionals of the single-particle density; (ii) effective descriptions of relativistic systems; (iii) approximations that do not rely on gradient expansions; (iv) functionals of momentum space densities; (v) functionals for ultracold bosonic systems; and (vi) efficient methods catering for two-dimensional systems, particularly in view of high-throughput first-principles calculations.
The long-term goal is to push these methods toward chemical accuracy, to identify failure mechanisms, and develop alternative approaches. Mathematical analysis will clarify the validity of the models, estimate the remainders when effective equations are used and give a correct numerical analysis on the obtained non-linear models. As a result, the analysis will usually suggest further improvements in model accuracy.
Several important new directions can possibly be derived from this program. These include, but are not limited to, further development of density-matrix functionals and connections to momentum-density functionals, relations between density functionals and Green's function methods, such as GW or dynamical mean-field theory, improved understanding of magnetic and relativistic effects within these theories.

Each week will be devoted to one major theme. We shall start the discussion with a survey of the state of affairs, listing down the problems to work on, and then focus - possibly in smaller groups - on these problems. There will be presentations on the progress achieved and also, if the need arises, tutorials on background material. Plenty of time will be reserved for exchange and discussions in between presentations.

Students and researchers who are interested in attending these activities are requested to complete the online registration form. Those invited to participate and those applying for financial support do not need to register.

For enquiries on scientific aspects of the program, please email admin@dfmps2019.org. 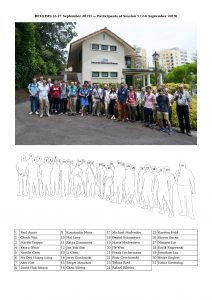 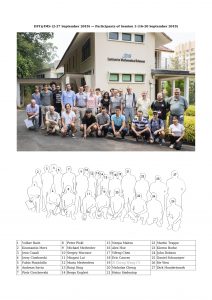 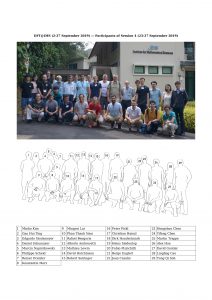