Held in conjunction with the Oppenheim Lecture (Jointly organized with Department of Mathematics, NUS)

Abstract: Varieties are geometric objects defined by polynomial equations. The minimal model program (MMP) is an ambitious program that aims to classify algebraic varieties. According to the MMP, there are 3 building blocks: Fano varieties, Calabi-Yau varieties and varieties of the general type corresponding to positive, zero, and negative curvature. In this talk, I will recall the general features of the MMP and discuss recent advances in our understanding of Fano varieties and varieties of general type.

Abstract: Recently there has been tremendous progress in using K-stability to construct and understood compactifications of moduli spaces of (log) Fano varieties. This talk will survey some recent work in this area, with a particular emphasis on applications to explicit moduli problems such as moduli spaces of plane curves and K3 surfaces of low degree. This is based on joint work with Kristin DeVleming and Yuchen Liu.

Abstract: Recent various splendid “boundedness” type theorems for varieties say that finite type schemes H parametrizes some classes of varieties or pairs. If we wish to construct “moduli” from the H (of usually huge dimensions), we need to divide H by a certain algebraic group G to avoid the large duplication, so that roughly the quotient H/G should be the moduli M. Here we encounter many more problems: to carefully restrict the class of varieties to make M nice, actual construction of M, understand properties of M, pursue “canonical” compactifications, and more explicit understanding of them.

We witnessed developments on these problems in the interaction with differential geometry and K-stability. I will give a survey on some part of recent developments around these topics with possibly personal bias i.e., especially on the recent concepts of canonical moduli i.e., K-moduli, weak K-moduli, and Gromov-Hausdorff compactifications. 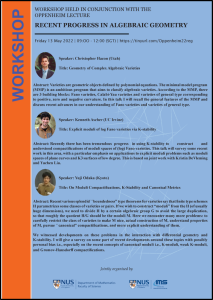