As a tribute to Professor Louis Chen on the occasion of his 82nd birthday and to celebrate his academic achievements, a symposium will be held from 17 to 21 June 2022 at the National University of Singapore.

Louis Chen has had a deep and long lasting impact on the development of Stein’s method for distributional approximation. During his PhD under Charles Stein, which he finished in 1971, he pioneered what is now known as the “Chen-Stein method”, a versatile and fruitful approach to approximating the distribution of the number of dependent rare events by the Poisson distribution. Chen’s results have been crucial in helping Stein’s method to become widely recognised, not least thanks to the Annals of Probability paper “Two moments suffice for Poisson approximations: the Chen-Stein method” by Arratia, Goldstein and Gordon, published in 1989. Poisson approximation in the form of the Chen-Stein method has since become textbook knowledge, and is part of the mathematical toolbox of every modern probabilist. It has become particularly useful in analysing extremal values of random processes in the presence of dependence, and it has found numerous applications, not only in probability theory, but also in other branches of mathematics, including computational biology, computer science, combinatorics and probabilistic number theory.

Chen’s contributions to Stein’s method are not limited to Poisson approximation. He introduced the notion of “local dependence”, which has been an important cornerstone in understanding and describing certain types of dependencies occurring in random phenomena. He also developed the “concentration inequality approach”, which has been a key ingredient in obtaining Berry–Essen type results for normal approximation. These concepts have all had major impact on progress in the field.

In the year 2000 and together with a group of colleagues — in particular Chi Tat Chong, who was then provost of NUS — Louis Chen helped establish the Institute for Mathematical Sciences and became its founding director. With the institute’s mission to foster mathematical research, both fundamental and multidisciplinary, and to bring top mathematicians from across the world to Singapore to participate in workshops and longer research programs, Chen’s impact on the development of the mathematical community in Singapore cannot be overstated. The interaction between the institute and the local research community has given competitive advantage to both the Department of Mathematics and the Department of Statistics and Applied Probability, and it has helped create a research vibrancy at a level unseen before in Singapore.

Louis Chen has also had more direct impact on the development of the two departments — he was head of the Department of Mathematics from 1996 to 2000 and head of the Department of Statistics and Applied Probability from 2002 to 2004 — but his professional service has not been confined to NUS. He served as president of the Bernoulli Society (1997–1999) and of the Institute of Mathematical Statistics (2004–2005), and as vice president of the International Statistical Institute (2009–2011).

The one-week symposium is jointly organised by the Department of Mathematics, the Department of Statistics and Applied Probability, the Faculty of Science and the Institute for Mathematical Sciences. It will cover a wide range of topics presented by distinguished scientists from around the world and will bring together Louis’s colleagues and friends, who have come to know him in special ways over the past 50 years. 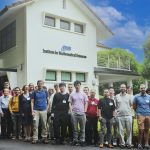