Abstract of the talk: There are many open problems in mathematics, and from time to time, a famous open problem is solved (a good example of this is Fermat’s last theorem). Should we expect that every open problem will eventually be solved? Gödel’s incompleteness theorem says that every rich enough mathematical system contains a problem that cannot be settled in the given system. Does that mean that there are problems that are inherently unsolvable? These are the issues that we shall explore in this talk, which will be accessible to a wider audience. 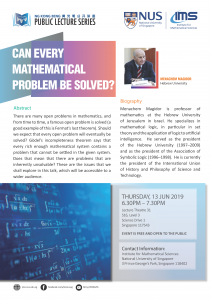